Pellet feed processing technology has been used for many years, and pellet feed has been widely used in the pig breeding industry. The pig pellet feed made by pig feed pellet machine can be made from a single feed or a formulated full feed through compression technology. The pellet feed is usually cylindrical and has different sizes. In the feed industry, the process of forming powdered feed materials through water and heat modulation and mechanical compression and forced passage through the die holes is defined as pelleting.

After the various raw materials of the pig feed are grinded and mixed, they can be used as powder for feeding or for further processing, and heating or pressure is usually required during processing. Making them into pellets is the most common method. The RICHI pig feed pellet making machine can be used to process pig feeds of different breeds and growth cycles, such as piglet feed, fattening pig feed, and sow feed. (Related post: how to start a new pig feed plant?) 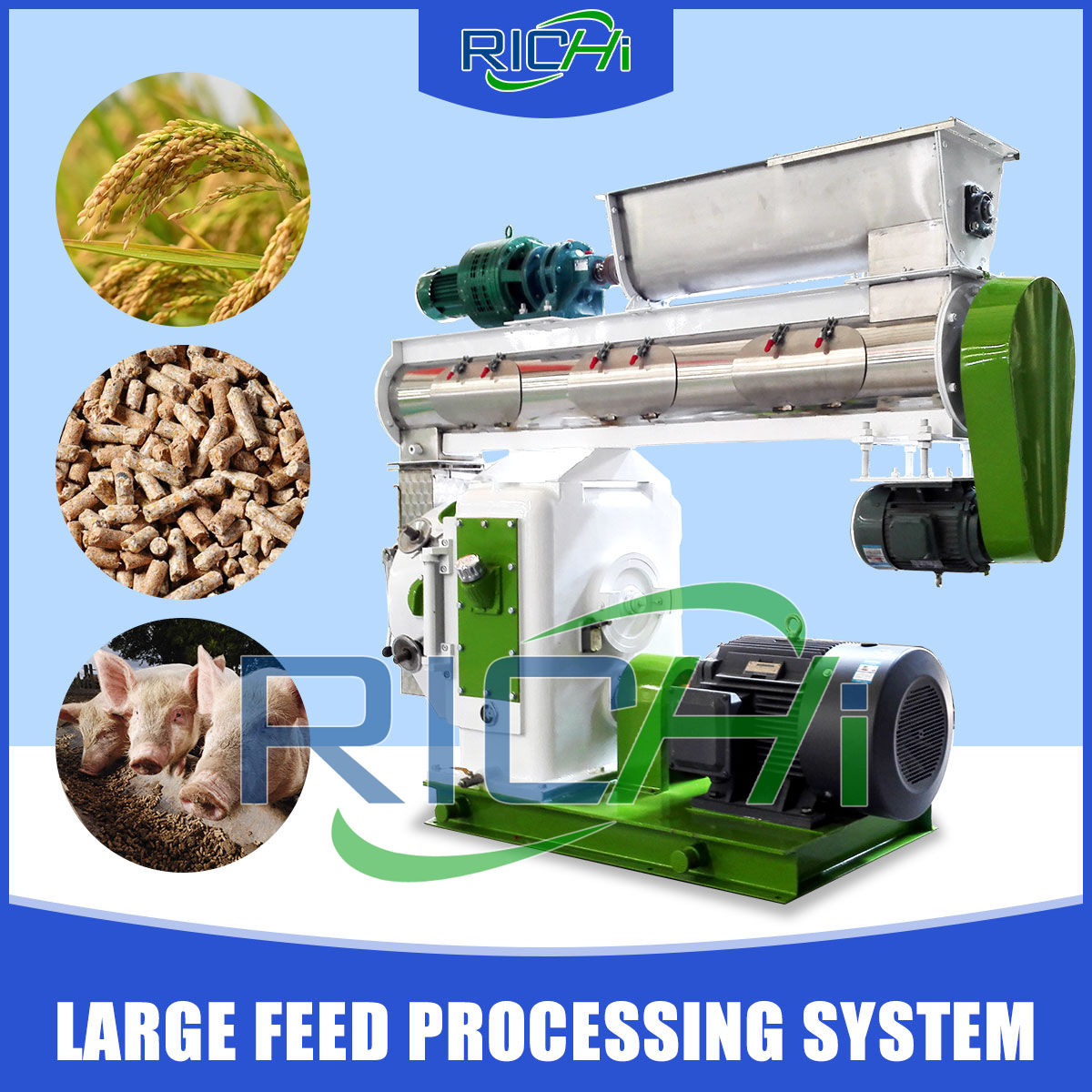 Why feed pigs with pellets feed instead of powder feed?

Pellet feed contains some condiments such as honey and oil during processing, and the diet of pigs will also increase; pigs like to eat plant rhizomes, and pellets are made of imitating plant rhizomes, which have relatively good palatability. In addition, Pellet feed is matured and extruded, which changes the feed structure, and the appetite of pigs will increase.

Pigs' sense of smell is more sensitive than dogs' sense of smell. This feature can help them find food, even a few meters underground. So pigs always pick and choose when they eat feed. Some feed will be spilled, compared to powder feed, pellets feed will not cause excessive waste of feed, and can ensure the conversion of nutrients.

Pig farmers may find such a problem when using self-mixing ingredients. Some formulated feeds have stratification. Because the density and volume of various powders are different, there will be stratification when put together. This situation will lead to uneven nutrient distribution, which is not conducive to the growth of pigs.

In addition, the powdered feed is dusty, which is easy to infect pigs with respiratory diseases, and the pellets will not have such problems, thereby ensuring the health of the pigs. 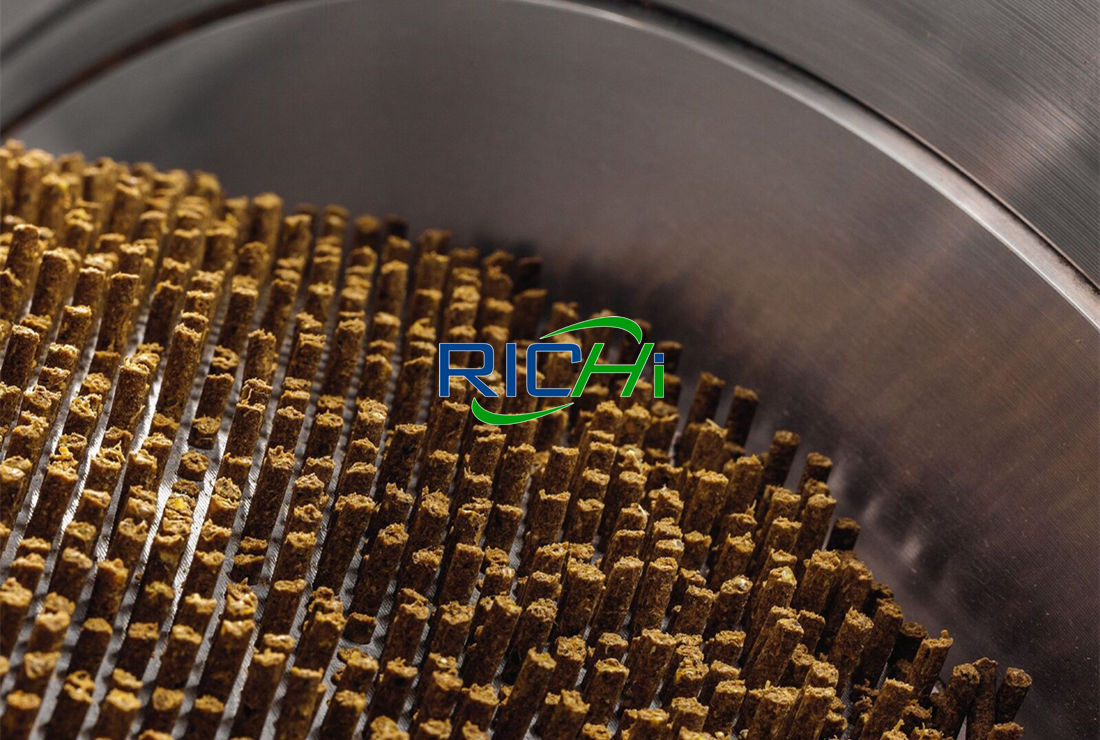 Self-prepared feed is easy to be infected by bacteria, viruses, etc., because the raw materials may be contaminated during the process from harvesting to transportation to storage and preparation. Bring losses to the pig farm. The pig feed pellets are pellets made with steam and high temperature. During the pig feed pellet machine production process, the high temperature can effectively kill pathogens, which leads to the safety of the feed.

Feed pellets are easy to transport

The volume of powdered feed becomes smaller after compression, and it is better to transport than powdered feed, which can effectively save transportation and storage space. 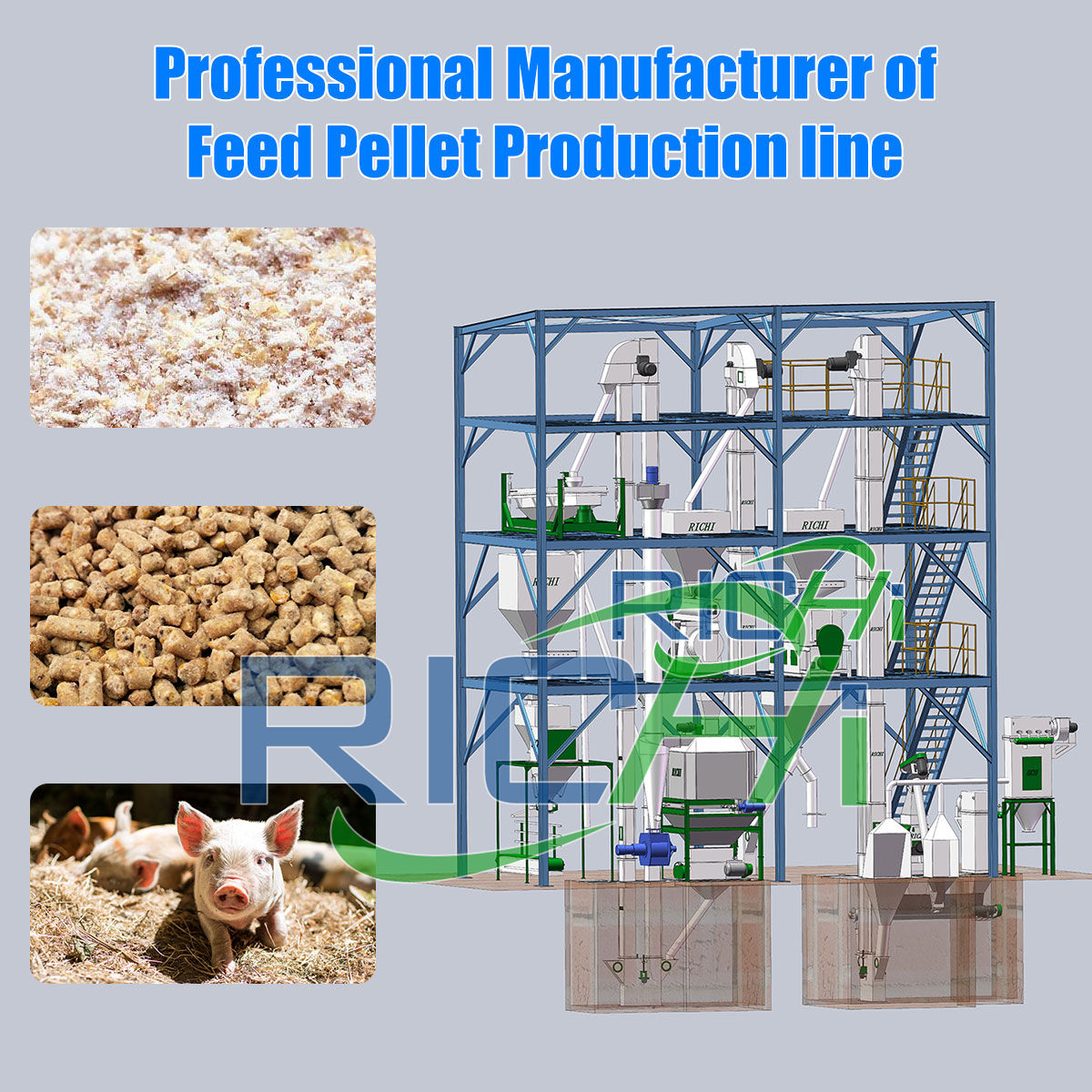 The working principle of the pig feed pelletizer: The powdered material is a discontinuous combination composed of dispersed particles with fluidity. The prerequisite for being compressed into particles is that there is a gap between them.

Therefore, under the action of squeezing, the gap between the powder particles is reduced, the particles move closer to each other and rearrange, the bonding force increases, and finally it is pressed into a pellet feed with a certain density and a certain strength. In this process, due to the action of steam, the starch in the feed is gelatinized, and the protein and sugar are heated to produce plasticity, so granulation is an extrusion-type thermoplastic process.

Richi Machinery have provided animal pig feed production lines, pig feed mills and single pig feed machines for thousands of feed manufacturers, and we hope that in the future, we can also help you successfully realize a high-efficiency, high-quality, and high-return feed production business.

Even if the customer wants to produce the same type of pellets, if the customer's feed formula, raw materials, and production technology are different, the pig feed pelletizer machine ring die, conditioner, etc. will be different.

The structure is similar to the batcher. The motor is frequency-regulated or speed-regulated, and there is a steam baffle at the feed inlet. The function of this machine is to evenly send the materials from the granulator bin to the conditioner, and the feeding speed can be adjusted according to the load of the main motor of the pig feed pellet machine. The material is stainless steel. The stability of the material flow has a great influence on the granulation quality. 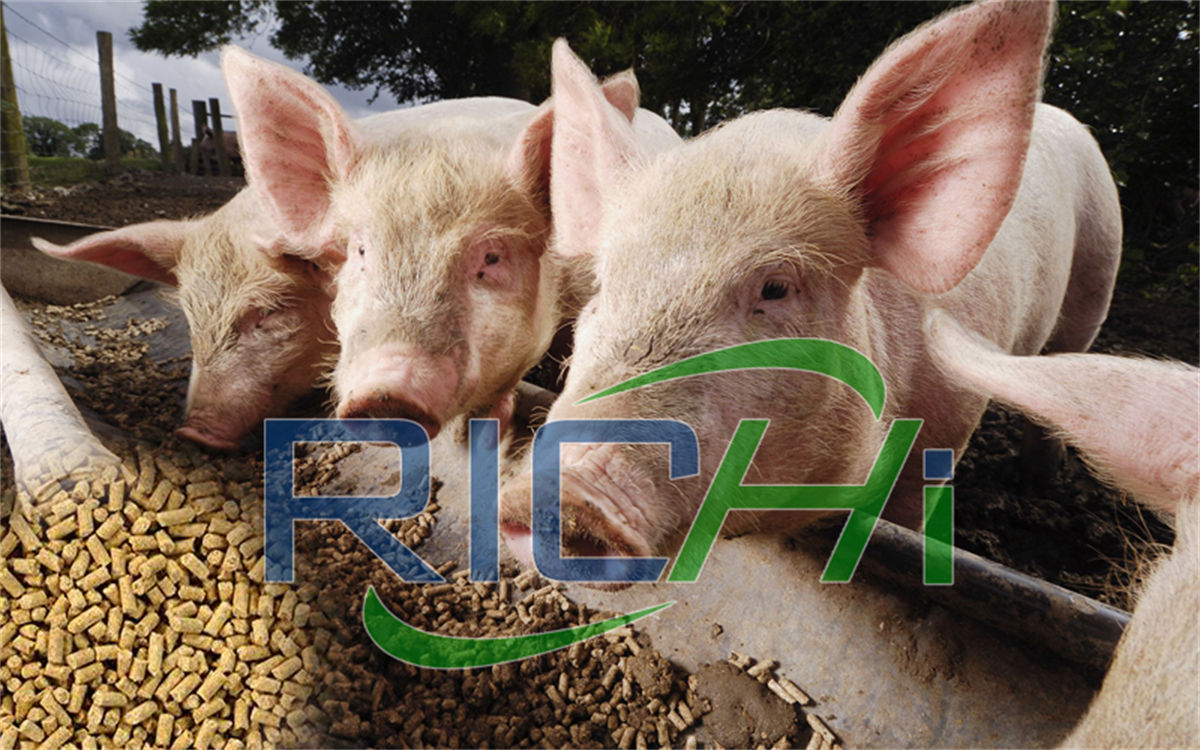 The structure of the pig feed pellet machine feeder is mainly screw feeder, and its structure has variable diameter and variable distance in the feeding section to ensure uniform discharge of the silo.

Its essence is a continuous mixer. The function of this stainless steel material conditioning machine is to fully mix steam and other liquids with powdery materials to improve feed quality and pelleting performance. 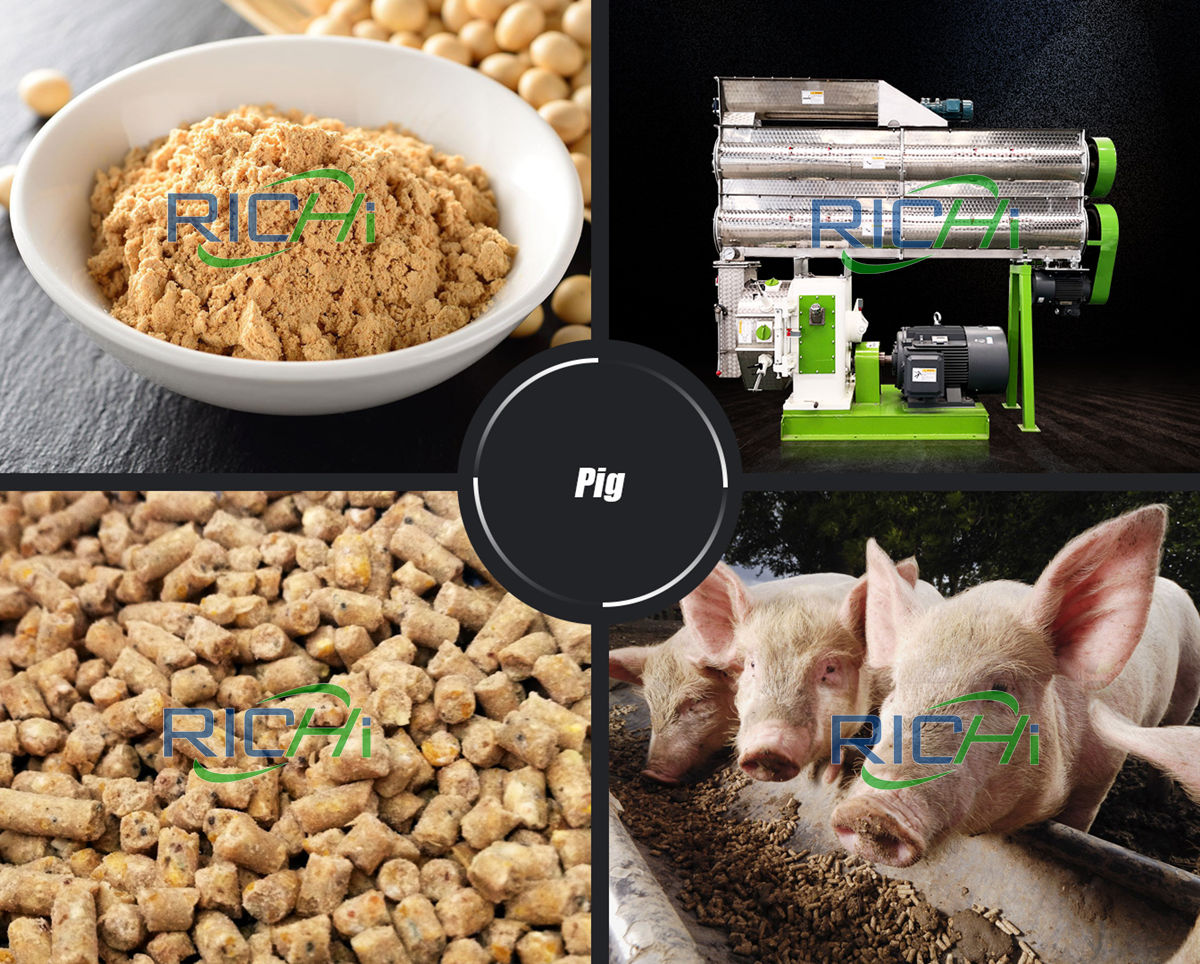 The impact of crushing process on pig feed pellet hardness

The decisive factor in the crushing process for the hardness of the pellets is the crushing particle size of the pig feed raw materials. Generally speaking, the finer the raw material is crushed, the easier the starch is to gelatinize during the pig feed pellet machine conditioning process, the stronger the binding effect in the granules, the less likely the granules are to break, and the greater the hardness. 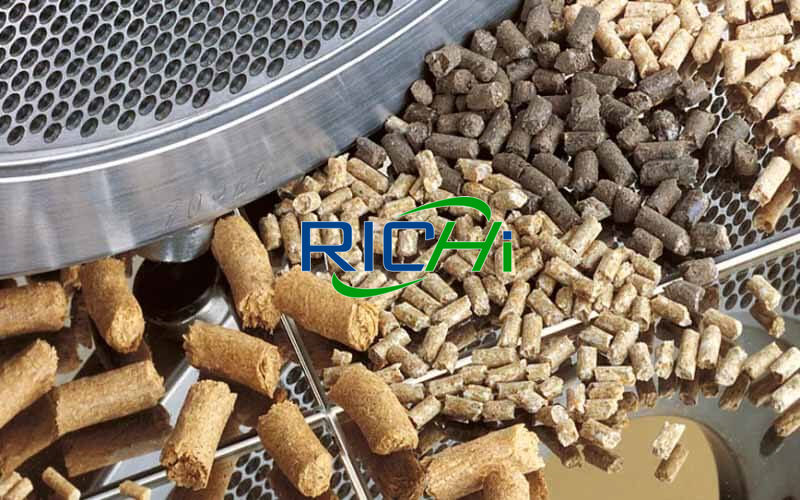 In the production of pig feed, it is generally required to crush more than 70% of the particle size between 700 and 500 μm, and more than 20% of the fine powder below 250 μm. Such a particle size distribution is conducive to the granulation and shaping of the pellets and the improvement of the appearance quality of the pellets, and can ensure the proper hardness of the product and a lower powdering rate. The impact of raw material expansion process on pellet hardness 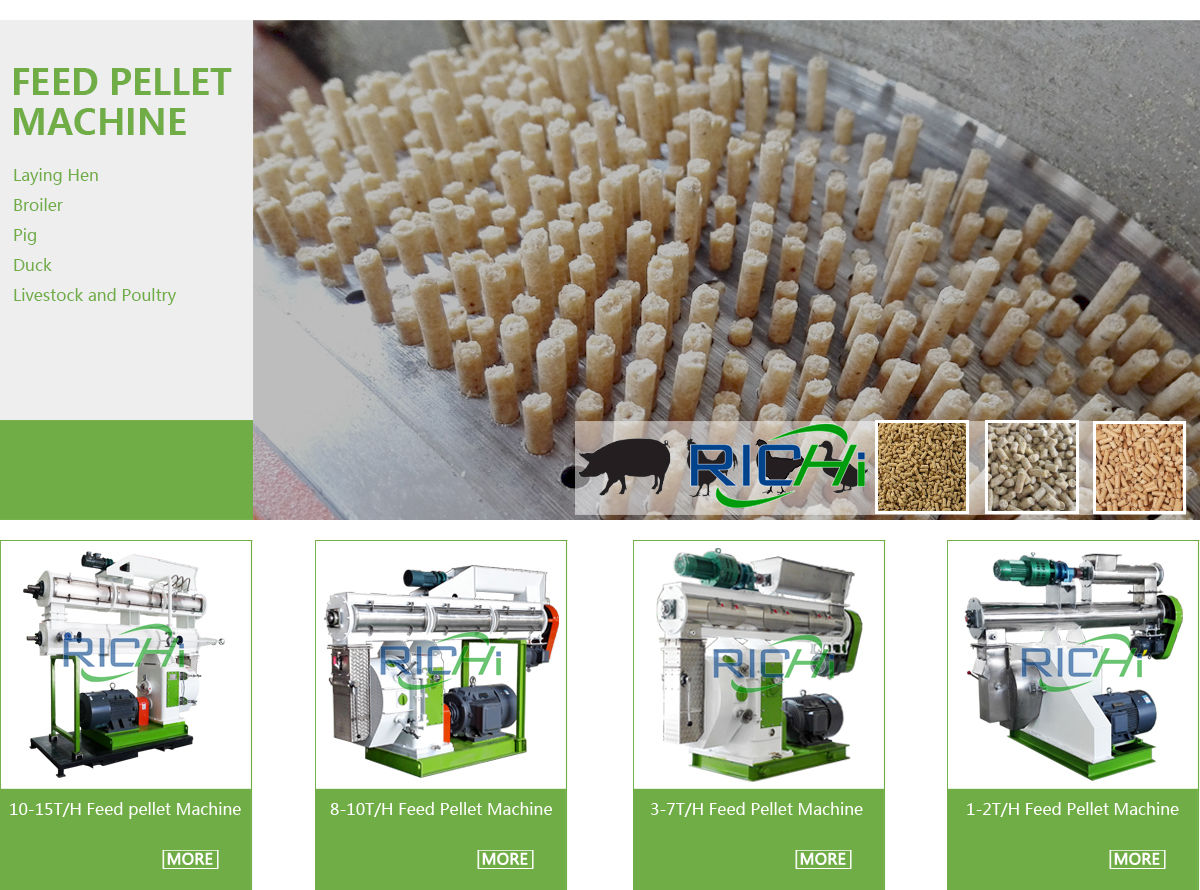 The influence of raw material mixing, water addition and oil injection process on the hardness of pellets

The mixing of raw materials can improve the uniformity of various pellet size components, which is beneficial to keep the hardness of the pellets basically the same and improve the product quality. The process of adding water in the pig feed mixer is still a problem that is being actively explored. In the production of hard pellets, adding 1% to 2% of water in the animal feed mixer is beneficial to improve the stability and hardness of the pellets.

However, due to the increase of moisture, it has a negative effect on the drying and cooling of the pellets. It is also unfavorable for product storage. In the production of wet pellet feed, up to 20%-30% of the water can be added to the powder, and it is easier to add about 10% of the water in the mixing process than in the conditioning process. 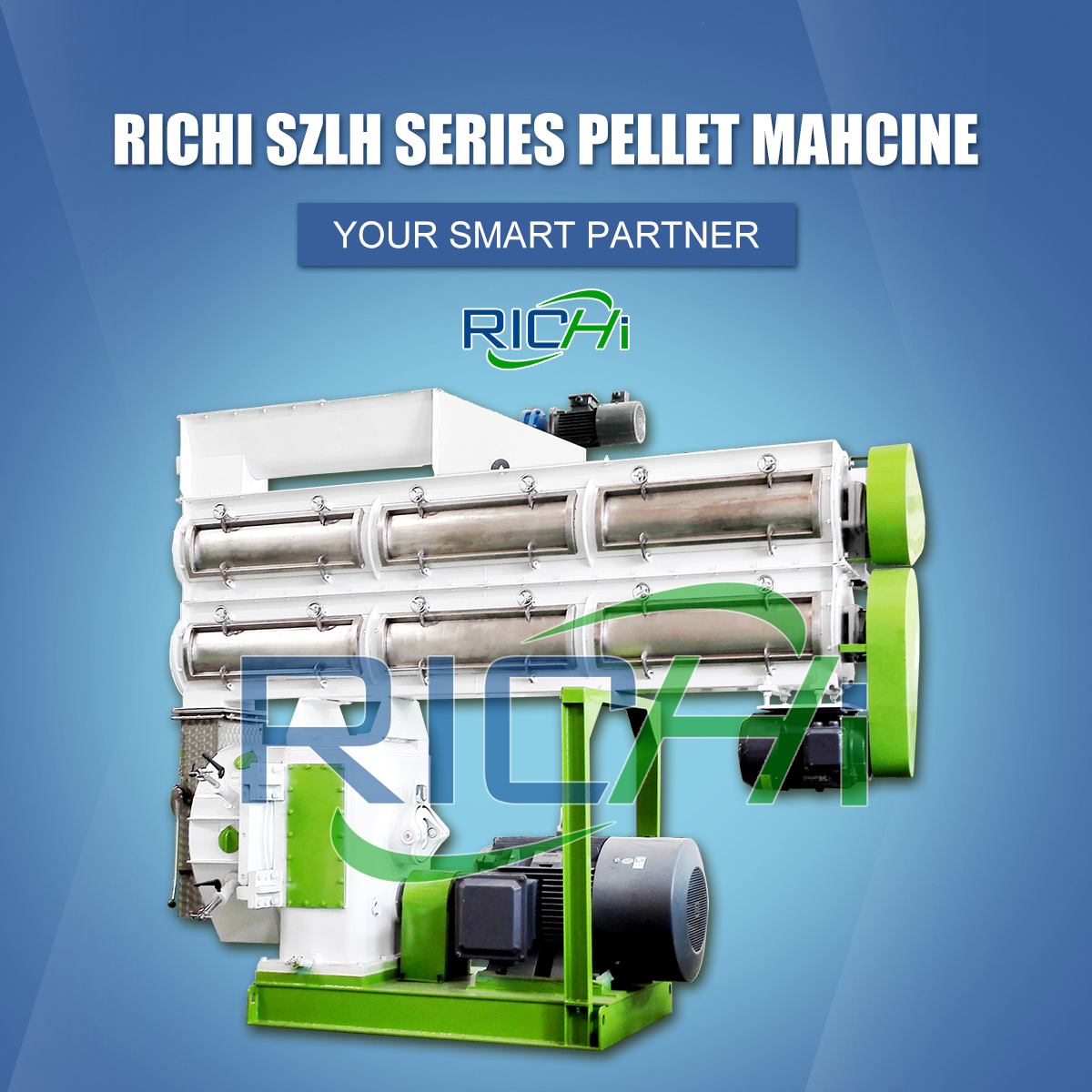 The formed pellets of high-moisture materials have low hardness, softness, and good palatability, which can improve the production performance of pigs. This kind of wet pellet feed made by pig feed pellet forming machine can be used in large-scale breeding enterprises. Wet pellets generally cannot be stored, and are generally required to be produced and fed. 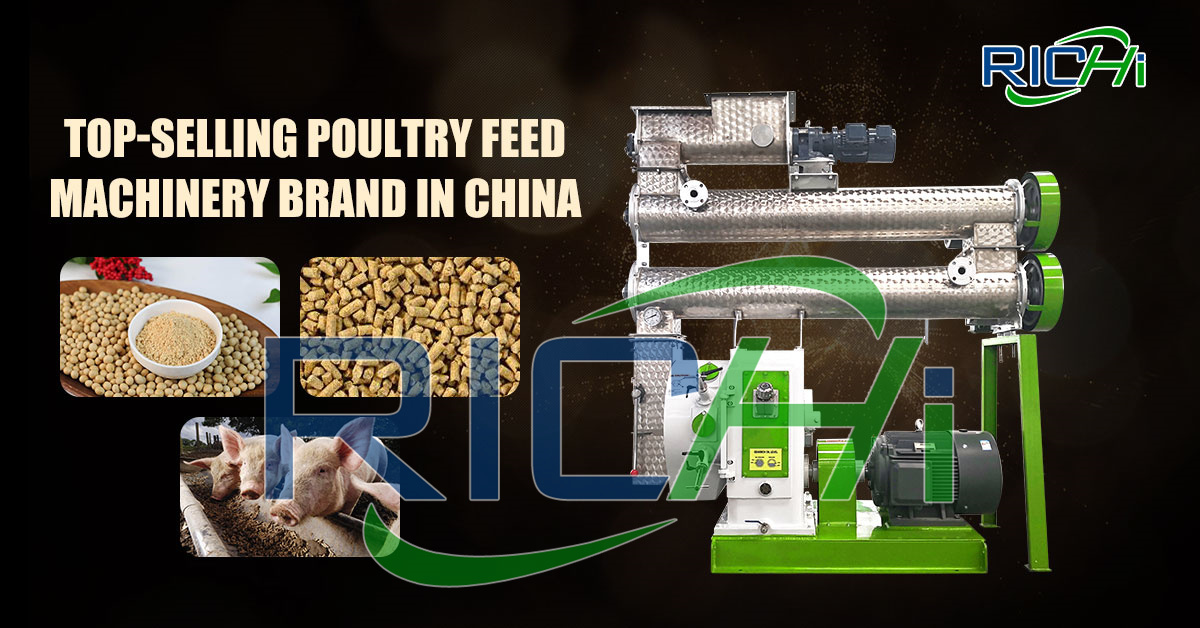 Steam conditioning is a key process in the processing of pellet feed by pig feed pellet machine. The quality of the pig feed pellet mill conditioning directly affects the internal structure and appearance of pellets. Steam quality and conditioning time are two important factors that affect the conditioning effect. High-quality dry saturated steam can provide more heat to increase the temperature of the material and gelatinize the starch.

The longer the conditioning time, the higher the starch gelatinization degree, the denser the formed particle structure, the better the stability, and the better the hardness. Bigger.

For general pig feed, by adjusting the amount of steam added, the tempering temperature is maintained at 70-80°C, and the tempering time is controlled at about 30 seconds by changing the length of the pig feed making machine conditioner, blade angle and rotation speed. For high-end pig feed, double-layer or multi-layer jacket conditioner are generally adopted to increase the conditioning temperature and extend the conditioning time. Choosing a suitable compression ratio ring die can produce pellets with suitable hardness. The length of the pellets has a significant impact on the pressure-bearing capacity of the pellets. The 8-shaped cross section has a stronger pressure bearing capacity than the circular cross section, and the measured hardness value is also greater. In addition, the material of the pig animal feed pellet making machine ring die also has a certain influence on the appearance quality and hardness of the pellets. There is a significant difference between the pellets produced by ordinary steel ring dies and stainless steel ring dies.

The influence of drying and cooling process on pellet hardness

In order to extend the storage time of pig feed products and ensure product quality within a certain period of time, the pig feed pellets need to be dried and cooled as necessary. 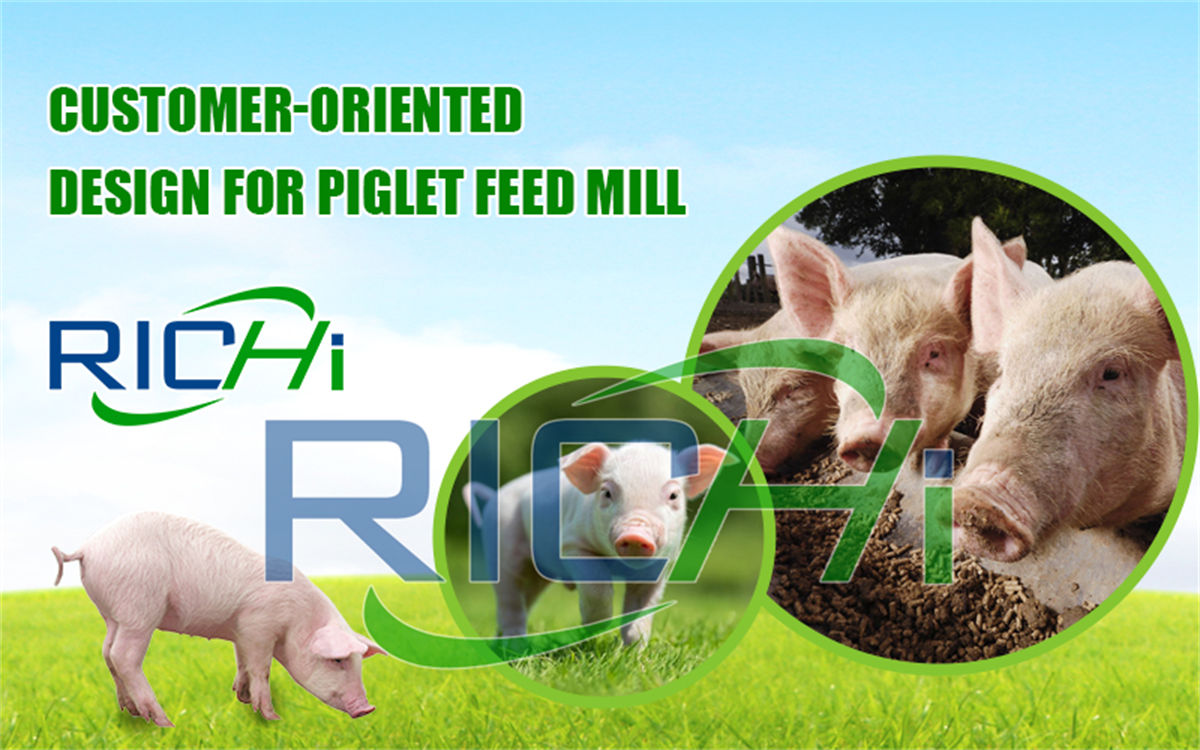 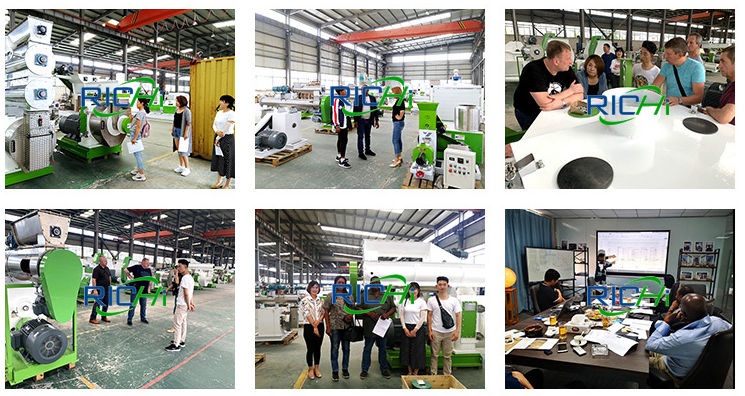 Poultry feed mill project with an annual output of 50,000 tons in China