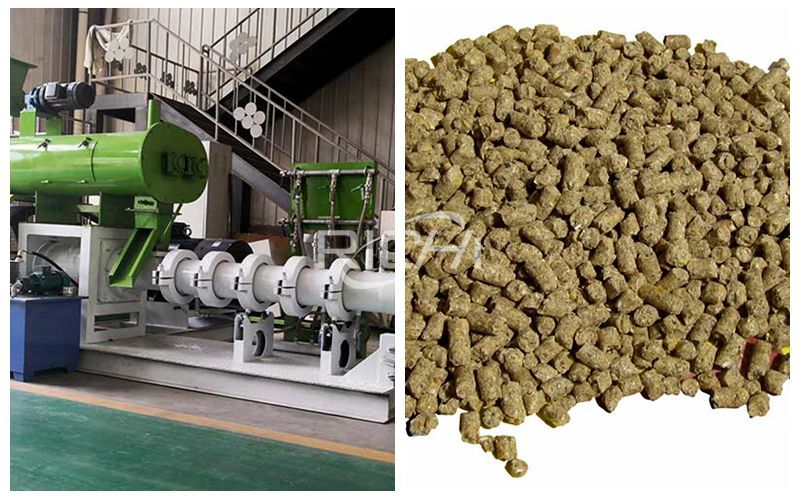 Extrusion is one of the most common methods of hydrothermal treatment of feed and food, known for more than 50 years. This method has long been popular particularly among the producers of fish feed and pet food. In the process, the complete compound feed is shaped by the extruder into the form of granules, which are subsequently treated, mostly by drying, coating and cooling. The aim of extrusion is to produce granule-shaped compound feed sufficiently coherent and mechanically resistant, fulfilling the requirements of shape, size and texture, or properties important for aquatic environments. Apart from its predominant advantages, extrusion also comes with some negative aspects: in particular, improperly set extrusion parameters may lead to a loss of some thermolabile components, such as vitamins A, C, and B1, as well as some enzymes and amino acids (lysine, methionine, cysteine).

Extrusion of only some ingredients

As we seek ways of making feed production more sustainable, we cannot omit the technology of extrusion cooking of feed components. Extruding selected feed compounds brings a number advantages, both dietetic and technological. In this technological setup, only a selected compound is extruded, usually one or two, which are then mixed into the final feed. Only the components that significantly benefit from extrusion are extruded, eliminating thus negative effects of extrusion, such as the loss of thermolabile substances in the final mixture. The importance of extrusion lies mainly in increasing the availability and digestibility of nutrients in the digestive tract of livestock. This occurs primarily via a radical reduction of the content of anti-nutritional factors, via denaturation of proteins, gelatinisation of starches, increasing the ratio of the so-called soluble fibre, and sterilisation of the extruded material. It is therefore a synergistic effect that helps to improve nutrient utilisation (Table 1).

In the energetically demanding process of extrusion, the highest costs are associated with the consumption of electricity and steam. In the extruder and its transport pathways, electrical energy is transformed into mechanical energy (SME) and the energy of heat is transformed into heat (STE). Both sources of energy are equivalent and, to an extent, interchangeable. But the production costs of one kilowatt as steam are only a third of those of one kilowatt as electricity. Therefore, it is economically advantageous to maximise the use of steam energy. Another way to save energy is using recuperation systems. The company Farmet offers multi-level systems of recuperation, where the condensation heat from the extruder and transport pathways, and the hot air from the presses are utilised to pre-heat the entering raw material.

The importance of cereal extrusion lies in the increased digestibility of starch (so-called gelatinisation) resulting from extrusion cooking, which occurs already at a moisture of 12 to 22%, in contrast to other food-related applications. When gelatinisation temperature is reached, both components of starch – the amorphous amylose and crystalline amylopectin – are transformed. Gelatinisation is augmented by the actions of pressure, heat, and shearing forces. The degree of gelatinisation can thus be manipulated by setting extrusion parameters.

In optimisation tests of wheat extrusion, carried out by Farmet, the effect of wheat variety and extrusion parameters on the feed conversion ratio in chicken broilers was tested. The treated wheat was mixed into the complete compound feed. The recipes for these mixtures were made to exhibit similar nutritional parameters. During the tests, savings between 4 and 14% were obtained, compared to untreated wheat (control), depending on the variety and extrusion parameters (Table 2).

Extrusion of oilseeds and legumes

Oilseeds and legumes (soybeans, sunflower seed, canola, peas, beans, lupine, etc.) are valued within the feed industry mainly in terms of their high protein content. Legumes and oilseeds contain substances with a negative effect on nutrient digestibility (anti-nutritional factors, ANFs), leading also to adverse effects on some animal products and feed intake and digestion. The most common ANFs are protease inhibitors, lectins, and urease activity observed in soybeans, and glucosinolates in canola. The activity of most ANFs is reduced upon the application of heat. Thanks to the high pressures and temperatures in the process, extrusion cooking is a very effective way to reduce ANFs. Oilseeds, compared to legumes, also contain a considerable amount of oil, which can be reduced by combining extrusion with the technology of screw pressing.

The extruders cause a removal of anti-nutritional factors, increase in the digestibility of starch and proteins, disruption of cellular structures, and overall heating of the material, all of which improve oil yield in the subsequent extrusion-pressing step. The end products of this process are vegetable oil and also press cake, which is a convenient substitution for extracted soybean meal. Fattening tests were performed on broilers to compare parameters of nutrition between extruded full-fat soybeans, extruded soybean cake, and extracted soybean meal. The recipes for mixtures containing these components were made to exhibit similar nutritional parameters. The tests have shown a better feed conversion ratio (FCR) in both extruded soya bean cake and extruded full-fat soya bean, compared to extracted soybean meal (Table 3).

The current trends of increasing commodity prices and decreasing energy costs play into the hands of methods of hydrothermal treatment of feed such as extrusion. Optimising the whole process offers a path to lowering energy demands and improving final product quality – certainly a path to success. Research and development of the extrusion technology has recently made great advances, notably in the automation of control and optimisation of energy efficiency. However, optimising extrusion in terms of feed-related value of the extrudate with the goal of increasing animal productivity still offers considerable room for improvement and will remain an active area of research in the future.

The above is the article for you: Feed Extruder: Highly Efficient Feed Machinery in the Aquatic Industry.