Recently, the reporter learned from Liuba Town, Yongchang County that as of now, the town’s 100,000-ton alfalfa product storage, transportation and processing project has put in place a fund of 77 million RMB, and purchases 38 sets of imported agricultural machinery and equipment; The construction of grass product storage warehouses, pellet compress processing lines, workshops and supporting infrastructure; completed the transfer of 6742 acres of land in 2018, and transferred 5,432 acres of land in Baba Village and Nanzhuang Village of Liuba Town in 2019, further expanding the town's forage planting area , To promote the development of efficient water-saving agriculture.

It is reported that this 100,000 tons of alfalfa product processing project and pelleting process is a major project in our city, with a total investment of 150 million RMB. Based on the efficient water-saving alfalfa planting industry in Liuba Town, it will give full play to its marketing advantages and actively participate in the rural "three changes" reform. Construction project of alfalfa planting and processing park. The project includes a 100,000-ton alfalfa product storage project and an alfalfa pellet processing line construction project.

The 100,000-ton alfalfa product storage project has a total investment of 70 million RMB and covers an area of ​​59 acres. It will be purchased, harvested, bundled, and coated 230 sets (sets) of various equipment such as, crushing, pelletizing, electronic trading, etc., and supporting infrastructure construction such as water, electricity, and roads; 100,000 tons of alfalfa pellet production line construction project covers an area of ​​15 acres, with a total investment At 82.122 million RMB, a processing line of alfalfa pellets with an annual output of 100,000 tons will be built, equipped with facilities such as grass pellet production workshops, pellet product storage warehouses, equipment warehouses, and corresponding infrastructure such as water, electricity and roads. 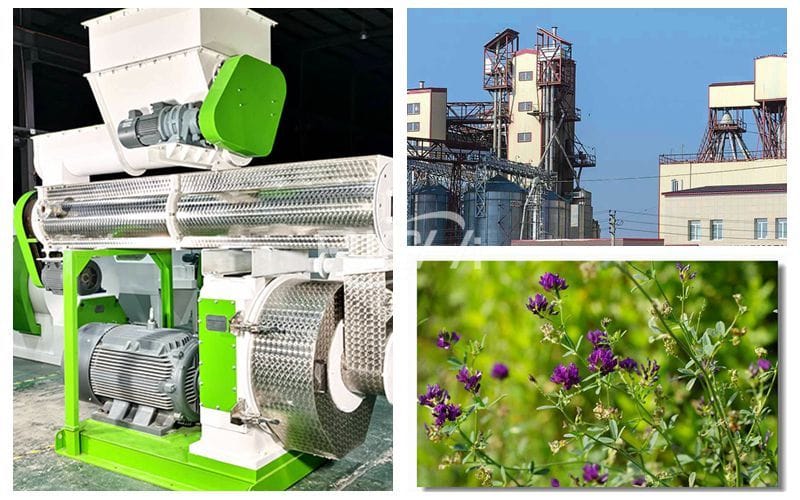 After the 100,000 Tons of Alfalfa Product Processing Project is completed, it can achieve annual sales income of more than 100 million RMB, which can effectively drive the planting of high-quality alfalfa in Yongchang County to more than 200,000 mu, enhance the adjustment of agricultural industry structure and the ability of intensive processing of forage products, and further expand and optimize the industrial layout and accelerate modern circular agriculture. The construction of industrial parks and increasing the added value of forage products have a strong driving effect.

While the slender stems and sprouted seeds are sometimes eaten by humans, alfalfa is mainly used as animal fodder. It is usually cultivated for hay, and is frequently used for silage or haylage, dehydrated to make meal or pellets, or used fresh by grazing or cut-and-carry. In several countries, dehydration plants produce alfalfa pellets with standardized protein content targeting specific markets. When managed as a pasture it can be grown as a pure sward or with companion legumes or grasses. Pigment-rich protein concentrates obtained by pressure of the aerial part are produced industrially for poultry and pig nutrition

Benefits of Alfalfa as Animal Feed

Alfalfa makes excellent animal feed. Not only is it a rich source of minerals and vitamins, it also contains up to 22% of crude protein. It contains vitamins such as A, E, K, D, B1, C, B2, B12, U, B6 and acids such as folic acid, panthothanic acid, biotin, niacin and inocitole. In addition to these, alfalfa has high levels of calcium, sodium, potassium, phosphorus, sulfur, copper, chlorine, magnesium, iron, boron, manganese and cobalt.

The benefits of feeding alfalfa to dairy animals include the following:

Alfalfa originated from the Mediterranean basin and southwest Asia and was one of the first forage crops to be domesticated. It is now cultivated worldwide, from 36°S to 58°N and from sea level up to 2400 m. The USA is the main producer of alfalfa, and the crop is common in many parts of Europe as well as in the Middle-East, Africa, South America and Australia.

Due to its variable genetic base, alfalfa has good adaptability to different environmental conditions. Optimal growth conditions are 25°C average day-temperatures and 600 to 1200 mm annual rainfall. It appreciates a long day season and bright sun light. It grows best on deep, well-drained, sandy to fertile loamy soils, with 6.5-7.5 soil pH. Alfalfa is tolerant of drought due to its deep roots. However, it is also cultivated without irrigation in dry regions with 200 mm annual rainfall as well as in humid regions that receive 2500 mm rainfall. It tolerates relative salinity. Some cultivars are winter hardy and known to tolerate temperatures as low as -25°C in Alaska while others tolerate high temperatures provided they are not combined with high air moisture. Alfalfa responds well to irrigation but does not stand waterlogging or soil compaction.

The raw alfalfa grass is first freed from heavy contaminant (rocks, metals and other foreign material), and then grinded in a hammer mill or a chipping machine. The particle size is adjusted to a uniform maximum dimension, which is approximately 85 % or less of the minimum thickness of the pellet to be produced. The often high moisture content of raw alfalfa makes drying necessary. The product from the hammer mill is therefore transported to a dryer (generally a rotary drum type one) where the moisture content of the uniformly dimensioned particles is reduced to about 10 % (w.b.). 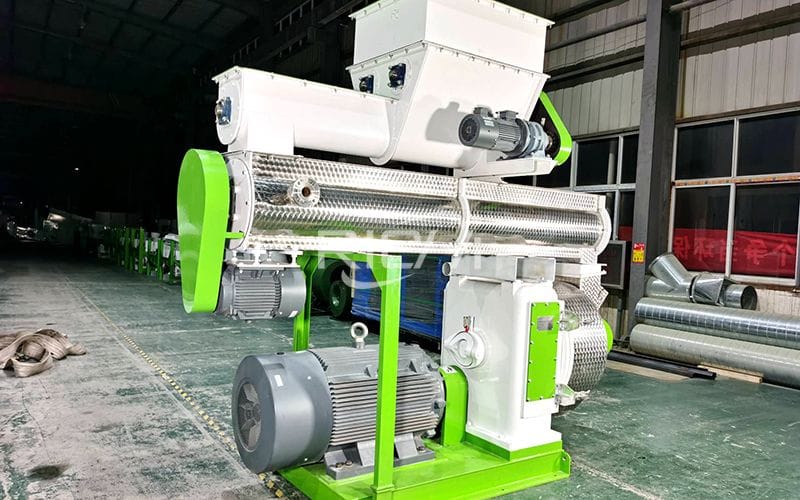 Then, alfalfa particles can be conditioned, i.e. steam or organic binding agents can be added (according to legal specifications). After conditioning, the particles are then moved by conveyor to a pellet mill, where the pellets are extruded through the action of rollers acting on a perforated matrix. On the outer side of the latter, a knife cut off the pellets at the desired length. Residual moisture in the feedstock turns to steam during compression and helps lubricate the compression die. After extrusion, alfalfa pellets are very hot (90-100°C) and are immediately air quenched down to 25°C. This sets up the lignin and hardens the product, and contributes to maintain its quality during storage and handling.

Finally it is screened, so as to separate the residual fines which are generally re-used in the process. Dust free alflafa pellets are then ready for storage (in a silo) or for automatic packing (in 25 kg bags or big bags – 1 to 1,5 m³).

In the second step in alfalfa pellet processing, there are two main types of pellet presses: flat die and ring die types. Green grass, hay with alfalfa as the main raw material and pressed by grass alfalfa pellet machine are 20㎜-30㎜ in diameter and 6㎜-8㎜ in diameter. The density is 600-1200㎏ / m3, which is 2 to 2.05 times that of loose grass powder. Can reduce the contact area with air, reduce oxidation, and facilitate transportation and storage. The final processed alfalfa pellets can be used as animal feed.

Alfalfa is an N-fixing legume and does not require added N fertilizer. In unfavourable soil conditions or when the crop is first grown, inoculation with Rhizobium meliloti may be necessary for good N fixation. As a perennial legume, alfalfa may be used as a cover crop: its roots improve soil texture and its leaves add organic matter to the soil. The leaf canopy prevents soil erosion. Alfalfa often increases the yield of succeeding crops. However, when alfalfa is ploughed under, care must be taken to prevent N losses due to the mineralisation of plant residues. N release occurs within 18 months after alfalfa removal and it is thus recommended to sow the following crop as soon as possible after ploughing. If the next crop cannot be sown before winter, alfalfa should not be cut in the autumn.

The melliferous flowers of alfalfa attract bees and birds and enhance biodiversity. The crop is valued for honey production.

Genetically modified glyphosate-resistant alfalfa has been developed. Planting started in the USA in 2005 but was regulated in 2007 when a District Court found that risks of cross-contamination with non-GM alfalfa had not been sufficiently assessed by the USDA. The ban was reversed in June 2010 by the US Supreme Court and planting resumed in January 2011.

The Benefits of Growing Lucerne Alfalfa to Dairy Cows

The above is the article for you: 100,000 Tons Alfalfa Pellet Compress Processing Line Project.