How Ruminants Reduce Methane Production In The Rumen

Methane, a product of rumen fermentation which is belched by ruminants, inhibits the normal functioning of microbial enzymes and impairs rumen fermentation. It can also result in a loss of dietary energy which could otherwise be used by animals for productive purposes. A 20% reduction in methane emission could allow growing cattle to gain an additional 75 g/d of weight. In lactating cows, a 20% reduction in methane emissions represents the same amount of energy needed to synthesize 0.6 kg/d of milk. Revenue generated from increased growth rates and milk yield could partially offset the cost of methane mitigation. 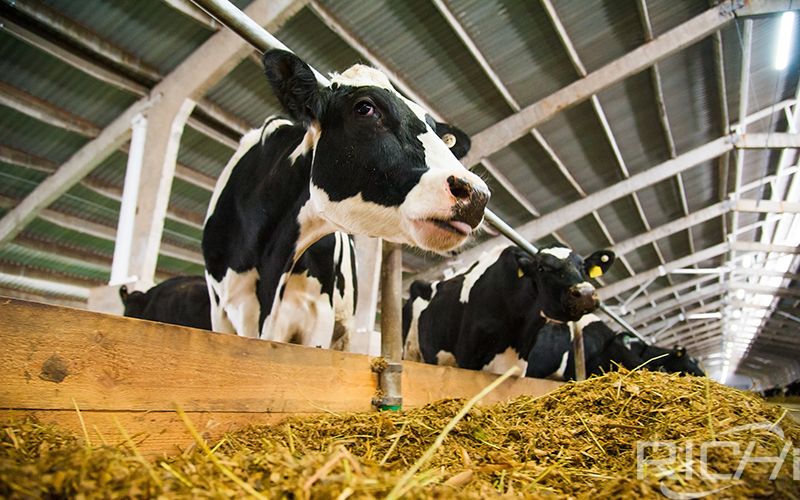 Mode of action of fat

Supplementing diets with fats and oils reduces enteric methane emissions. Reductions greater than 40% have been achieved, but reductions of 10 to 25% are more commonly reported. Incorporating fat in the diet as an energy source lowers the carbohydrate content, which is the substrate for methane formation. Fats also reduce the number of protozoa in the rumen, many of which are physically associated with the methanogens. However, the effects of fat on methane production are not limited to those mediated via the rumen protozoa. Fats have also been shown to inhibit methanogenesis, even in the absence of rumen protozoa. This may be due to the toxicity of long-chain fatty acids to methanogenic bacteria, and to the fact that they typically result in a reduction in the digestibility of cell wall carbohydrates, leading to reduced production of acetate and an increased propionate to acetate + butyrate ratio, which in turn reduces the production of hydrogen and thus methane.

In studies examining the effect of fats on methane emission, coconut oil has frequently been used, as its fatty acid concentration is different from that of all other vegetable oils (i.e. it contains large amounts medium-chain fatty acids, which are particularly effective in reducing methane production). Coconut oil can reduce methane production by up to 70% without affecting dry matter intake, digestibility, and the production and quality of milk when added to the ration at 250 g per cow per day. In sheep feeding trials, it was determined that 25 g/kg of coconut oil reduces methane production, methanogen bacteria, and protozoa without affecting the sheep’s performance. The use of coconut oil above the recommended levels may, however, reduce the performance of both cattle and sheep and also make feeding programmes uneconomical due to its high cost.

It has been shown that the use of polyunsaturated fatty acids, especially from linseed, to reduce rumen methanogenesis may be a practical abatement technology for ruminant production. The use of products based on linseed is interesting due to the simultaneous enhancement of the nutritional value of milk and ruminant meat, provided that the linseed does not reduce overall fermentation and thus does not impair animal performance. Other studies have explored the use of sunflower, canola, rapeseed and soybean oils to reduce methane emission. It has been reported that oils such as sunflower and canola, which are rich in long-chain fatty acids, reduce methane release in cattle which are mainly fed on roughage, and enhance the efficiency of gross energy by up to 22%. For rapeseed oil, it was determined that methane production decreased by 7.3% in cattle fed with corn silage or grass silage as roughage. Feed consumption, organic matter digestibility and rumen fermentation were not affected and there was no interaction between the fat and roughage quality. In another study conducted with different physical forms of rapeseed (oil, meal, cake and seed), it was observed that rapeseed can reduce methane release without affecting fibre digestibility and milk production and that its physical form did not affect methane production. Soybean oil was shown to be toxic to ﬁbrolytic microbes without decreasing ﬁbre fermentation in the rumen of growing lambs. In a study conducted on goats, it was shown that methane production decreased with the addition of 5% of soybean oil and that milk yield was not affected, while milk fat was improved. Further improvements were achieved by adding soybean, coconut, and palm oil to the diet.

The fat supplement helps reduce methane production by reducing the number of protozoa in the rumen and lowering the carbohydrate content of the diet, which serves as the main substrate for methane production. As a result, animal performance is improved in terms of rumen fermentation kinetics, and dietary energy is better used for growth and milk production.

Fat supplements may contain a single source of fat or a combination of different fat sources. In either case, the supplement should be provided at the recommended level or animal performance will be adversely affected.

There are, of course, other feeding strategies for reducing methane production, including the provision of adequate amounts of protein in the diet, the use of other supplements (e.g. enzymes, probiotics, etc.), and maintaining a proper forage-to-concentrate ratio. Such strategies should be combined with fat nutrition in attempts to alleviate methane-related problems.

The above is the article for you: How Ruminants Reduce Methane Production In The Rumen. If you are interested in our products or project solutions, please contact us. We will give you the best product quality and the best price. Email: sales@cnrichi.cn