New Role Of Russia In The Wood Pellet Market In 2020

Wood pellet production in Russia has steadily increased over the past decade, largely driven by exports to Europe where European pellet demand for consumer households and commercial heat and power plants is rising as EU countries increase their use of renewable energy under the Renewable Energy Directive. The EU-28 is the primary destination of Russian wood pellets, accounting for approximately 94 percent of Russian exports and 79 percent of all Russian wood pellet production in 2018. So far, in 2019, between January – July, wood pellet production reached 766 thousand tons, which is 121 percent higher compared to the same period last year. FAS Moscow expects production and exports to further increase in 2019 as European Commission mandates and Member State incentives expand within member countries. 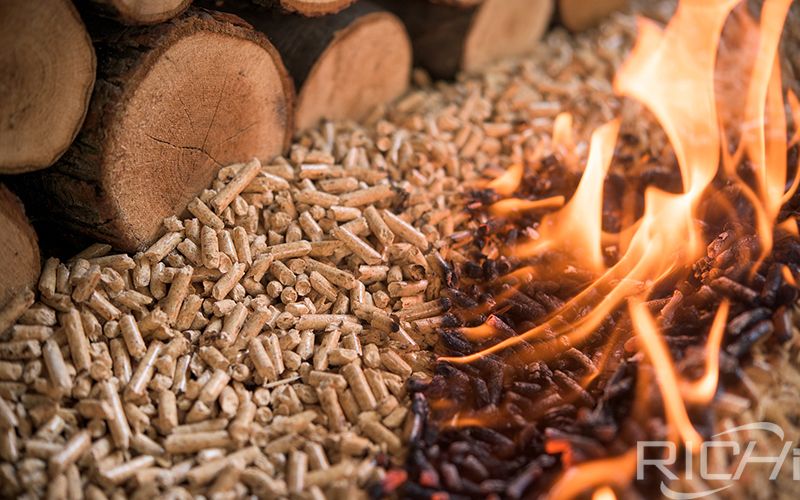 New Role Of Russia In The Wood Pellet Market In 2020

It should be noted that in 2018 30 companies produced 80% of the total volume of pellets in the country. 30% of the market is controlled by 3 groups of companies. An analysis of the competitive environment according to the Herfindahl-Hirschman index (its value in 2018 did not exceed 1000), makes it possible to classify the Russian pellet market to low concentration (monopolization) markets.

2018 was marked as the period of the most favorable prices for producers in recent years. The average selling price of pellets by manufacturers, according to official statistics, was 7700 rubles / ton. (104 euro / t.). The increase in average prices in rubles compared to 2017 amounted to 40%. First, a favorable market situation in export markets influenced the price growth: exporters' contract prices rose during the year, sales prices were at their peak in recent years. Secondly, ruble weakening in 2018 versus the dollar by 8%, versus the euro by 12% had a rise in prices in rubles.

According to the Russian Federal State Statistics Service (Rosstat) the country produced 1.4 million metric tons (MMT) of wood pellets in CY 2018, which is approximately a four percent increase from CY2017 data of 1.34 MMT, a modest growth considering the 30 percent increase that was seen between CY16 and CY17. Industry sources, however, indicate that production statistics for wood pellets by Rosstat primarily capture large-capacity factories, while mid-sized and smaller facilities, which operate as part of larger mills, do not report their production. As a result, FAS Moscow believes the actual wood pellet production is closer to 1.8 MMT, which matches FAOSTAT estimates.

The North-West Region accounts for most of the production but Siberia and the Central Federal District recently reported increases in the production capacity of wood pellets (see Table 1). Several pellet mills were constructed in connection to larger sawmills, providing companies abundant raw pellet material for the growing market opportunities, primarily in the European Union. In 2018, Segezha Group, one of the largest vertically integrated timber holding companies in Russia, began pellet production at two of its facilities, Sokol Integrated Woodworking Plant (North-Western District) and Lesosibirsky LDK No.1 JSC (Siberian Federal District). It is reported that the former will have an annual capacity of 70,000 tons, while the later will have a capacity of 12,000 tons, which will be mainly available for export.

In CY2019, between January – July, Rosstat is reporting wood pellet production at 766 thousand tons, which is 121 percent higher compared to the same period last year.

Table 1: Point of Origin of Russian Exports by Federal District

Wood pellet production in Russia has been steadily increasing in the past years. The North-West Region accounts for most of the production but the recent major increases in the production capacity are in Siberia and the Far-East Russia. Domestic markets for wood pellets in Russia are very marginal, and almost all production is exported. Pellet exports have been growing mainly in the EU countries such as Denmark and Sweden. In Siberia, pulp and paper industry offers only limited local demand for residual sawmill chips, which has forced many sawmills to dump their by-products. Several pellet mills are being constructed in connection to the sawmills, as the companies have abundant pellet raw material and growing market opportunities.

At the same time, the industrial wood pellet consumption in Asia has grown, mostly in South Korea and Japan. Numerous energy utility investment projects consuming wood pellets are planned in both countries. Asian industrial wood pellet consumption accounted for about a quarter of the global market in 2017 and is estimated to increase in the next years. So far Vietnam and Malaysia have been the major suppliers of wood pellets to Korea and Japan, but it is unlikely that these countries are able to increase the supply sustainably or provide supply security in the already tight and growing market. 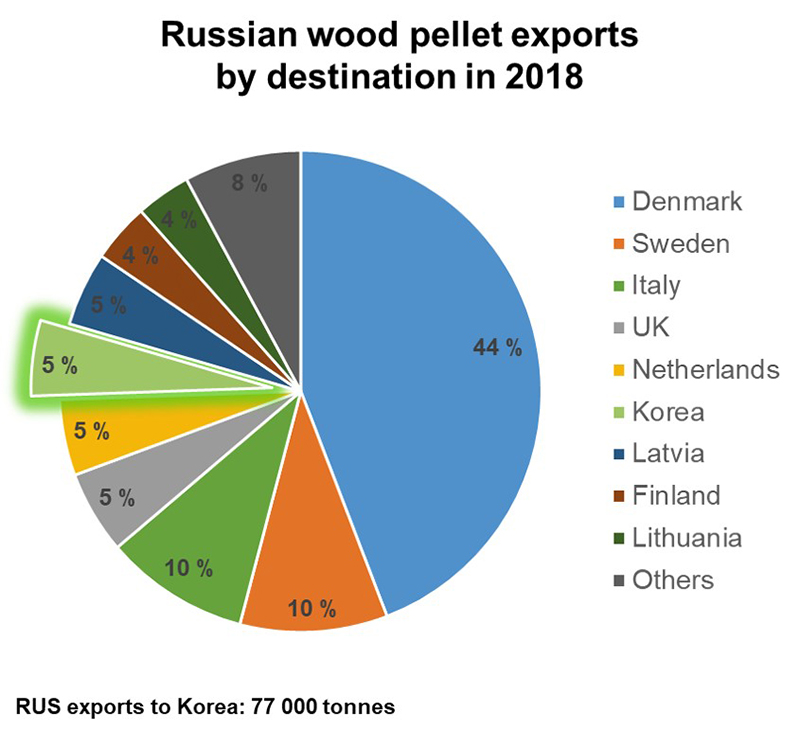 Domestic markets for wood pellets in Russia are very marginal, and domestic demand for pellets remains low. Russia does not show any signs of increasing incentives to support domestic consumption, and, barring any change, the industry will remain heavily export dependent. Currently, there are no economic or legislative drivers in Russia to support significant growth in the domestic consumption of wood.

Since the majority of Russian wood pellets are exported to EU countries, Russian producers are guided by the standards of those countries. For non-industrial wood pellets, the European Pellet Council (EPC) developed sustainability criteria called ENplus, based on EN 14961-2. It includes sustainability requirements for the entire supply chain. For industrial pellets, the Sustainable Biomass Partnership (SBP) developed a sustainability scheme based on existing programs, such as the Forest Stewardship Council (FSC) or Program for the Endorsement of Forest Certification (PEFC). Currently, 118 wood pellet producers in Russia own FCS certificates.

Russians use mostly European pellet mills, especially SPC pellet machines from Sweden. At the same time, wood pellet mill equipment from China, such as RICHI, FAMSUN and Azeus Pellet Mill, have continuously increased their share in the Russian market.

Since 2017, Russian exporters of wood pellets have been eligible for domestic support through the Russian Export Center (REC), which acts as the government agent for distribution of subsidies and state guarantees and directly supports exporters and investors abroad. Industry sources estimate that in 2018, around half of the total three billion rubles allocated by the Russian Government for the support of exporters engaged in deep wood processing, went to cover up to 80 percent of the exporters’ transportation costs. (Official Rub to Dollar Exchange rate as of September 18, 2019 is 64.43 Rub per USD). Experts believe that this measure will stimulate further expansion of the development of wood pellet producers, which is currently export oriented.

The above is the article for you: New Role Of Russia In The Wood Pellet Market In 2020.