Why Should Straw Be Made Into Pellet Feed for Cattle and Sheep Ruminants?

My country is rich in straw resources. According to statistics, the country’s annual output of various crop straws amounts to 600 million tons, accounting for 20% to 30% of the world’s total straw output, and its amount is equivalent to more than 50 times the amount of grass cut in the northern grasslands. At present, domestic crop stalks are used for feedstuffs. In my country, only 6%-8% of meat is converted from grass, while the United States accounts for about 73%, and Australia accounts for about 90% of meat converted from grass. This shows that my country's straw resources still have great potential for utilization. 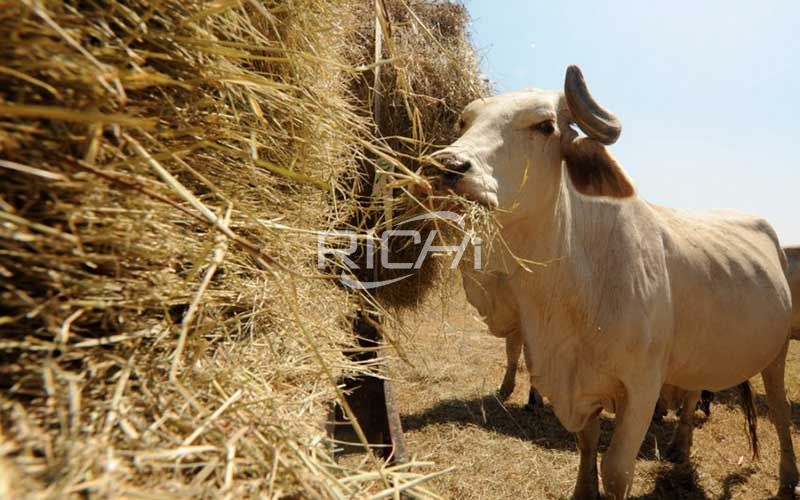 Looking at the development trend of the world feed industry, the processing and utilization of roughage such as straw is playing an increasingly important role in the feed industry. This is mainly because:

1. Coarse fodder such as straw has abundant reserves and low price, and the proportion of processed and utilized is small at present;

2. Ruminants and other herbivorous livestock, which account for a large proportion of animal husbandry, feed on forage grass and certain roughages;

3. As the demand for feed grains in various countries continues to grow, leading to a shortage of feed grains. This forces people to try to use coarse fodder and straw to develop animal husbandry, and give priority to the development of herbivorous livestock.

I. What Is Straw Feed?

Straw feed is the remaining stalks and leaves of crops after harvesting seeds. Its crude fiber content is as high as 30-50%, protein is 2-8%, and crude ash content is above 6%. The content of other vitamins except vitamin D is extremely low. It is a type of large volume, poor palatability, and low nutritional value. Roughage with low digestibility. However, straw feed has a wide range of sources, types, quantities, and low prices. It contains more than half of the energy accumulated by plant photosynthesis. As a non-competitive feed resource, as long as it can be processed and modulated reasonably to increase its digestibility The ingestion amount used to feed livestock and poultry, especially to feed ruminant livestock such as cattle and sheep, can still become a high-quality feed source. 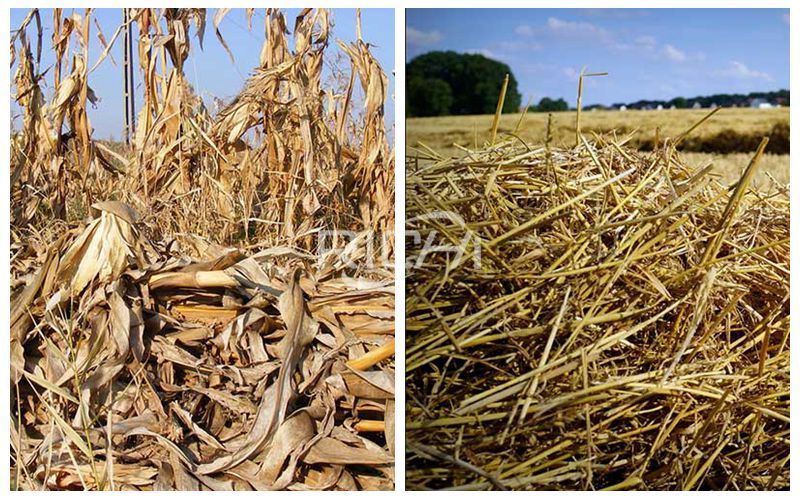 Since the first introduction of pellet feed production technology in 1930, pelleting has become one of the most common processes in feed processing. Compared with powdered materials, granular materials have the advantages of nutritional factors and non-nutritive factors:

1. Such as reducing dust, preventing the occurrence of reclassification of feed components during transportation, etc., so as to ensure the balanced intake of nutrients for animals and prevent picky eaters;

2. Increase animal feed intake by improving the palatability of feed, while saving the time and energy consumption required for animal feeding;

3. Through high temperature treatment of granulation, pathogenic microorganisms can be killed; in addition, packaging and transportation costs or storage space can be reduced.

II. The Relationship Between the Feeding Effect of Pellets on Animals and Pellet Size

The particle size depends on two factors. One is the feeding behavior of the animal, for example, piglets prefer small pellets; the other is the production efficiency of the pelletizer. The use of a large diameter and thinner ring mold to produce pellets is efficient. Low energy consumption. Reports on the effect of particle size on pig growth performance are rare. Helodevverson (1996) fed growing-finishing pigs with pellets processed by ring molds with diameters of 3.1mm, 3.9mm and 4.8mm. The results showed that the diameter of the die hole was 3.1mm. Traylor et al. (1996) reported that the particle size (2mm, 4mm, 8mm and 12mm) had almost no effect on the growth performance of weaned piglets from day 0 to day 5, but during the period from day 29 to finishing, 4mm particles had a positive effect on ADG. Effect, FCR increased by 4%. Peter (1998) summarized the Danish pig feed processing experience and concluded that for pigs of different ages, 2.5mm can be widely accepted, but the particle diameter of the piglet feed is 2mm. Hancock et al. (1999) believe that a single particle diameter of 4mm-5mm is more suitable for pig feed, which can significantly save the time for replacing the ring die and the investment for the ring die. 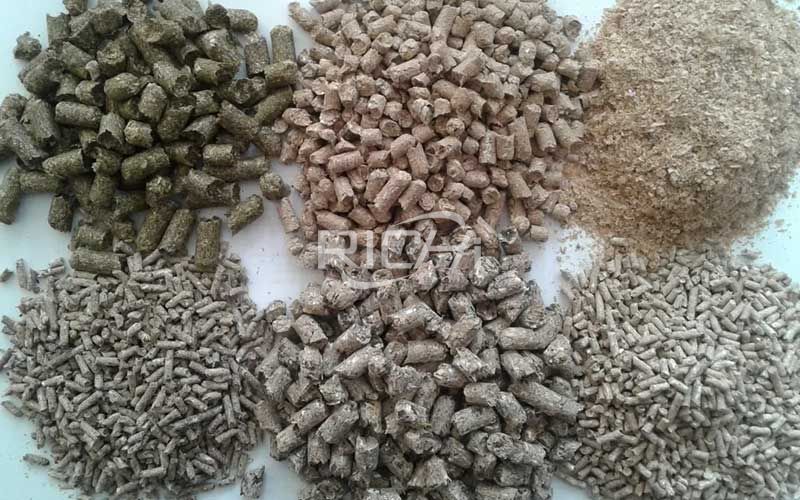 III. The Necessity and Basis of Straw as Feed for Cattle and Sheep

1. The use of straw pellet compound feed to raise livestock, through the digestion of animals to return the straw to the field, reduce the amount of chemical fertilizers, reduce the chemical residues of crops, increase the soil organic matter content, and enhance its water permeability, which can promote a virtuous cycle of agricultural production and make While increasing agricultural production, reduce production costs.

2. In the process of high-temperature extrusion and granulation, the raw materials are matured and some bacteria can be killed, so that the straw pellet compound feed has good palatability, livestock chews, feed intake increases, digestion and absorption rate and feeding efficiency are greatly improved. Concentrated feed is pelletized by adding straw powder to increase the comprehensive utilization rate by more than 30%;

3. The volume of straw is compressed by nearly 8 times after granulation, and it becomes "compressed biscuits" for cattle and sheep, which is convenient for transportation and storage, greatly reducing food transportation costs, and is not easy to mold in summer, fire and flame retardant, which is the strategic reserve of feed and disaster prevention reserve. The best way.

Domestic market: According to relevant statistics, a cow needs 10 kg of roughage per day, and a sheep needs 3.3 kg of roughage per day. Our country needs about 800 million tons of roughage every year. The grassland degradation in our country is very serious. The grassland area in the 1990s was only 50% of the 1960s. The number of herbivorous livestock increased every year, while the grassland area decreased year by year, resulting in a shortage of roughage in my country. Only in Ximeng, Inner Mongolia Autonomous Region In 2000, there was a shortage of 3 million tons of forage grass. With the improvement of people's living standards, the demand for milk continues to increase. Large and medium cities across the country are vigorously developing the dairy industry, and there is a great demand for roughage. The domestic market is vast, and the demand for roughage is stable, and it is increasing year by year. 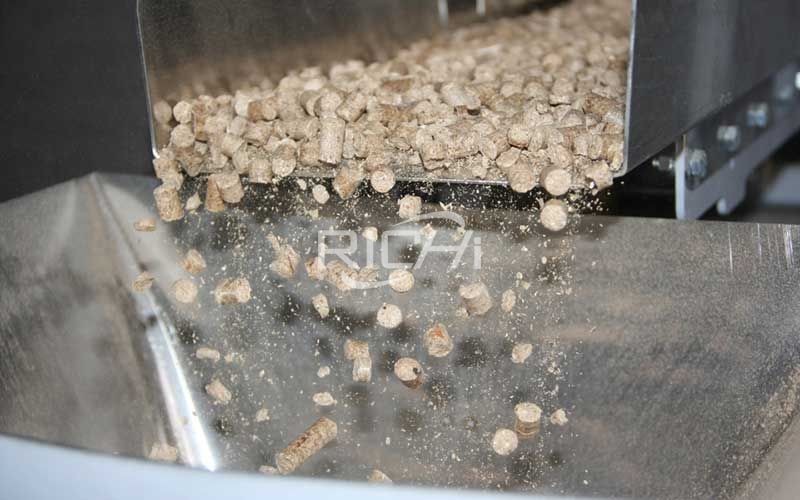 International market: Some resource-poor countries in the world, such as Japan, South Korea, Singapore and the Middle East, need to import large amounts of hay and feed grains every year to meet the needs of their domestic animal husbandry. The Hokkaido region of Japan alone needs 5.5 million tons of roughage every year, and now it mainly relies on imported hay from the United States and Australia to make up for the shortage of roughage, while the price of hay in the United States and Australia is more expensive. In some countries in the Middle East, such as Israel and Saudi Arabia, due to traditional customs, animal husbandry is to raise herbivorous poultry. The Middle East is a desert area where forage grass is extremely scarce. They also rely on imported roughage to support their animal husbandry. Straw feed has a quality similar to that of hay, but the price is cheaper than hay in the United States and Australia, and is easily accepted by these countries and regions.

At present, the factor affecting the development of scale and standardization of cattle and sheep is the problem of forage. In the past, farmers used their own feed to raise cattle and sheep, and the general idea was that they could only raise cattle and sheep if they had grass. To completely solve this problem, it is necessary to commercialize forage feed. If the straw biological pellet feed is promoted, it can solve the problem of large-scale and standardized feeding of forage for cattle and sheep. The straw biological pellet feed is small in size, low in moisture content, convenient for packaging, convenient for storage and transportation, and convenient for fire prevention; it is not easy to deteriorate and is convenient to feed. It can be used as commercial forage feed for farmers. Large-scale and standardized feeding farms process this feed to feed cattle and sheep. The ratio of feed and meat (milk) will be reduced, which will not increase the cost, but will also increase benefits due to the increase in feed nutrients, changes in feed formulations, and increased labor productivity .

The above is the article for you: Why Should Straw Be Made Into Pellet Feed for Cattle and Sheep Ruminants?.

Previous：What Are the Raw Materials of the Biomass Pellet Machine?